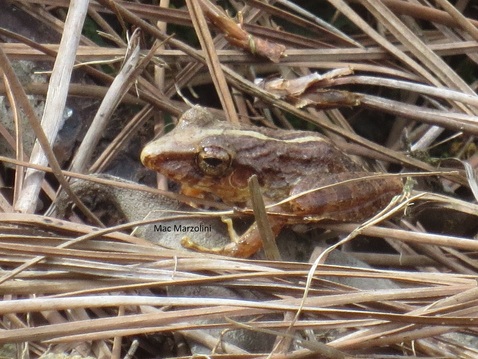 Natural History:
​Fitzinger's Robber Frogs are common within their range and spend most of their time around forest edges and dry forested regions of moderate temperature as they are mesophilic. Although not that rare, museum specimens have been found to carry chytridiomycosis (chytrid) fungus. Chytrid fungus attacks the sensitive skin of frogs resulting in a series of unfortunate symptoms such as convulsions, ulcers, hemorrhages and behavioural changes all before the individual dies. The infection has a 100% chance of killing the animal making it incredibly dangerous to wild frog populations.
Like most other frogs, the Robber Frog possess levator bulbi muscles which allow the eyes to stick up on the top of its head. The muscles also aid in swallowing which is why frogs often close their eyes when they eat. Frogs also have specialized eyes, while most animals have cones in their eyes for low light and rods for vibrant colours, frogs have green rods which are believed to aid in seeing in pitch darkness. This is beneficial as frogs frequently breed at night where there are less predators and the sun wont dry up their moist skin.

Anecdotal:
​In Costa Rica my father and I decided it would be a good idea to climb the volcanic crater; Cerra Chato. I was alright climbing the 1,140m tall volcano into a cloud but my father found it to be a challenge due to his athletically challenged physique. On the way back to the hotel he had to sit down and with nowhere to sit down he sat on a small grassy hill just off of the road. I was to sit down next to him but I looked before I sat down and came across this little frog. At the time I did not know what species so I took some photos while my father was dying beside me. Once we got back to the hotel large quantities of water were consumed and rest was needed.
Powered by