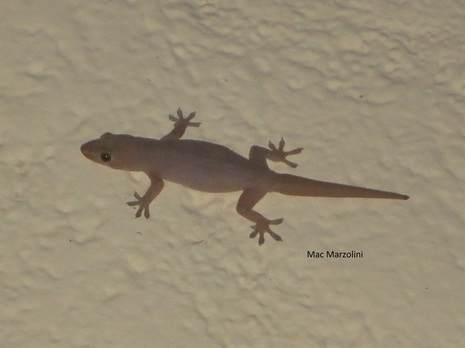 Natural History:
​Wandering Geckos are also known as Fox Geckos, Garnet's House Gecko (after the French naturalist; Prosper Garnet), and Indo-Pacific Gecko after their range. The natural range of Wandering Geckos stretches from Nepal all the way south to Australia where their range covers most of South-East Asia along with many Polynesian islands. They have also been recently introduced to Hawaii, Florida, New Zealand and Costa Rica where they have deemed invasive.
The entire population of Wandering Geckos are female and breed through parthenogenesis. Parthenogenesis is when the females reproduce asexually. Two of these lizards pseudocopulate without any genes shared, this is done to stimulate the organs needed. They will both lay eggs where the young have chromosomes identical to the single biological parent. While parthenogenesis may be advantages when it comes to growing in population is also restricts the species' ability to evolve due to the restricted genetic diversity among populations which hinders the appearance of detrimental and beneficial mutations.
​Geckos are known for their ability to stick to glass and other hard surfaces. They do this with microscopic hair like structures each with their own hair like structures on the pads of their feet. These hair like structures are known as setae and become adhesive when pushed up against something solid.
Powered by