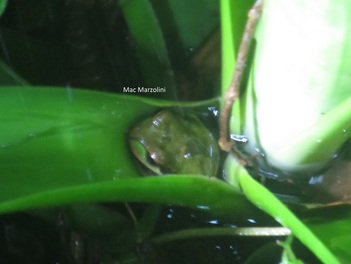 Natural History:
​​The Masked Treefrog gets its name from the discolouration found around the eyes. This discolouration gives the illusion that the frog is wearing a mask.
Like other tree frogs the Masked Treefrog comes out to breed at night during heavy rain. In the rainforest there is a plethora of frog calls and frogs have an adaptation so not to get confused with all the different calls. The frog's ear drum is specially tunes so that it can only hear calls made by the same species, this reduces the background noise and maximizes the frog's chances at reproduction. This ability is not specific to the Masked Treefrog but is common in all other frog species.
​Like most other frogs, the Masked Treefrog possess levator bulbi muscles which allow the eyes to stick up on the top of its head. The muscles also aid in swallowing which is why frogs often close their eyes when they eat. Frogs also have specialized eyes, while most animals have cones in their eyes for low light and rods for vibrant colours, frogs have green rods which are believed to aid in seeing in pitch darkness.

​Anecdotal:
​I saw this species of treefrog while on a guided night hike in Costa Rica, at that time I was not at all invested in herping nor did I even know of the term herping and as a result did not invest enough time into getting a decent photo of this beautiful species. I hope someday to return to Costa Rica and get a better photo of this species and to see so much of the herptiles that the country's rainforests have to offer.
Powered by